Europe’s population is on the move, and a new report suggests exactly where and why.

Released last week by Eurostat, the statistical office of the E.U., this blockbuster annual yearbook offers a dizzying number of insights into the state of a changing Europe.

Among the sheer volume of detail, some clear trends emerge: younger people are leaving Europe’s south, especially its rural areas, in search of work in urban areas of the continent’s job-rich northwest. That’s creating a demographic hole that might presage extended, continuing decline.

The chart below provides some clues to this movement. Looking at median ages, it shows what might be expected: Europe’s rural areas tend to have older populations, while capital cities (marked by blue dots) are more likely to be younger than a country as a whole. Greece’s Evrytania region posted the oldest population; it’s a rural area where outward migration of young people has pushed the median age up to 53.6 years. While rural regions are seeing the sharpest rises in median age, this phenomenon is both national and local. 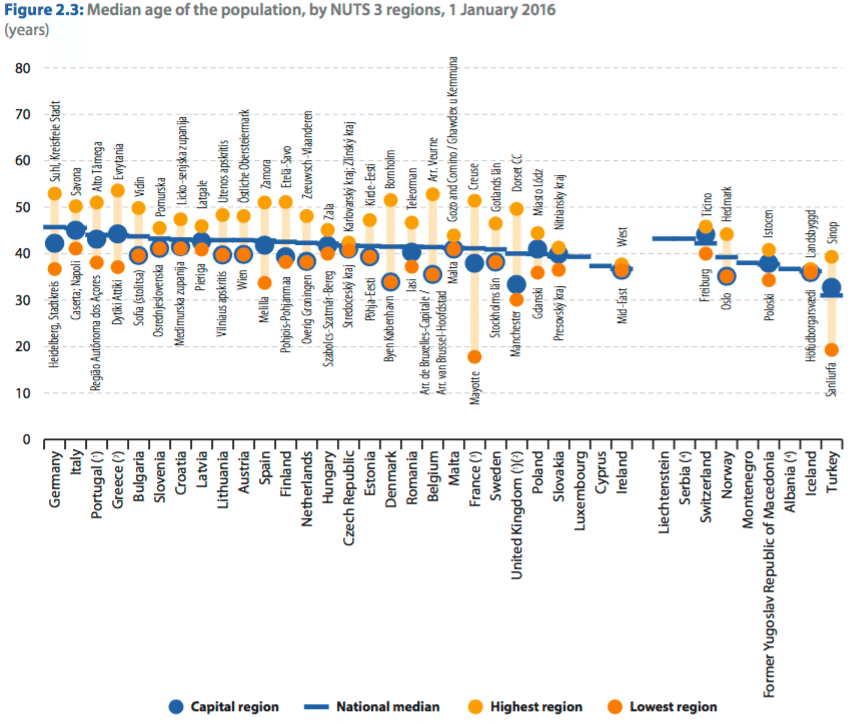 Between 2006 and 2016, Romania, Lithuania, Greece, and Portugal all saw their median ages increase by more than four years. That rise can’t simply be accounted for by an overnight spike in life expectancy; this is clearly because people—especially young people—have been leaving in large numbers.

“Median age rises can stem from two things: young people leaving [and] a low birth rate, which of course can be combined,” says Pernd Parusel, a migration expert at the European Migration Networks. “I know that some Central and Eastern European countries, such as the Baltic States, for example, have a significant out-migration, especially young people at the beginning of their careers.”

Corning’s CEO, Wendell Weeks, is always setting the bar beyond what is reasonable. Recently, an engineer proposed a brilliant solution for increasing the efficiency of a technology by 25 percent. Weeks asked, “Why not 50 percent?” The engineer was flabbergasted at the outrageousness of the question. But then he started considering what it would take to achieve that goal. Even though 50 percent was not realistic, the question prompted him to think of possibilities that he would not have considered otherwise.

So between a falling birth rate and a high rate of youth migration, which one is the primary cause of these countries’ rapid aging?
Looking at the map above, low birth rates are clearly an issue across Europe. Across the map, Spain, Italy, Slovakia, and Greece show the most consistently low birth rates. This is probably a sign both of people choosing to have fewer children for economic reasons and of people who actually decide to have children choosing to leave their countries of origin.

There doesn’t seem to be an automatic link between population aging and birthrate. While the Lithuanian and Romanian populations have aged rapidly, both countries have a relatively high birthrate by the standards of the region. It’s thus clear that youth migration is a major factor, albeit one not working in total isolation from a lowering proportional number of births.

So where are these young people heading? We don’t get clear-cut answers from the report, because any migration increases also include arrivals from outside the E.U.—a group whose numbers spiked in 2015 as a result of the migrant crisis. But the map below shows that, within the E.U., Germany was a center of gravity. Having accepted 1.2 million migrants in 2015, it was the most common end point for migrant journeys that year—although the greater refugees from war in Syria remained in the eastern Mediterranean.

It would nonetheless be mistaken to let the effects of the migrant crisis mask other important, ongoing trends.

“It’s certainly true that Sweden and Germany have received a lot of asylum seekers during the European migrant crisis, but the interesting case in Germany is that they also had of E.U. nationals at the same time,” Parusel tells CityLab. “If you look at the nationalities moving to Germany in 2015, the main national group was from Syria, but followed by Romania, Poland, Afghanistan, Bulgaria, Italy. It’s a very mixed picture of people coming from both conflict countries further afield and from people from within the E.U.”