Palantir Knows Everything About You

We know and are constantly remembered that data is the new goldmine - as the FB-Cambridge Analytica showed us there are multiple ways to manage data and we urge a high degree of public scrutiny on companies dealing with government and people's data.

Aided by as many as 120 “forward-deployed engineers” from the data mining company Palantir Technologies Inc., which JPMorgan engaged in 2009, Cavicchia’s group vacuumed up emails and browser histories, GPS locations from company-issued smartphones, printer and download activity, and transcripts of digitally recorded phone conversations. Palantir’s software aggregated, searched, sorted, and analyzed these records, surfacing keywords and patterns of behavior that Cavicchia’s team had flagged for potential abuse of corporate assets. Palantir’s algorithm, for example, alerted the insider threat team when an employee started badging into work later than usual, a sign of potential disgruntlement. That would trigger further scrutiny and possibly physical surveillance after hours by bank security personnel. 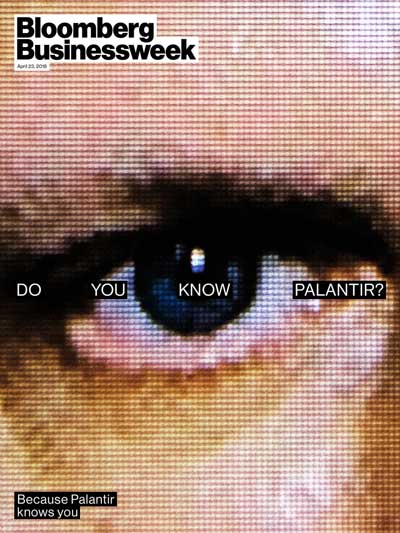 Over time, however, Cavicchia himself went rogue. Former JPMorgan colleagues describe the environment as Wall Street meets Apocalypse Now, with Cavicchia as Colonel Kurtz, ensconced upriver in his office suite eight floors above the rest of the bank’s security team. People in the department were shocked that no one from the bank or Palantir set any real limits. They darkly joked that Cavicchia was listening to their calls, reading their emails, watching them come and go. Some planted fake information in their communications to see if Cavicchia would mention it at meetings, which he did.

It all ended when the bank’s senior executives learned that they, too, were being watched, and what began as a promising marriage of masters of big data and global finance descended into a spying scandal. The misadventure, which has never been reported, also marked an ominous turn for Palantir, one of the most richly valued startups in Silicon Valley. An intelligence platform designed for the global War on Terror was weaponized against ordinary Americans at home.

Founded in 2004 by Peter Thiel and some fellow PayPal alumni, Palantir cut its teeth working for the Pentagon and the CIA in Afghanistan and Iraq. The company’s engineers and products don’t do any spying themselves; they’re more like a spy’s brain, collecting and analyzing information that’s fed in from the hands, eyes, nose, and ears. The software combs through disparate data sources—financial documents, airline reservations, cellphone records, social media postings—and searches for connections that human analysts might miss. It then presents the linkages in colorful, easy-to-interpret graphics that look like spider webs. U.S. spies and special forces loved it immediately; they deployed Palantir to synthesize and sort the blizzard of battlefield intelligence. It helped planners avoid roadside bombs, track insurgents for assassination, even hunt down Osama bin Laden. The military success led to federal contracts on the civilian side. The U.S. Department of Health and Human Services uses Palantir to detect Medicare fraud. The FBI uses it in criminal probes. The Department of Homeland Security deploys it to screen air travelers and keep tabs on immigrants.